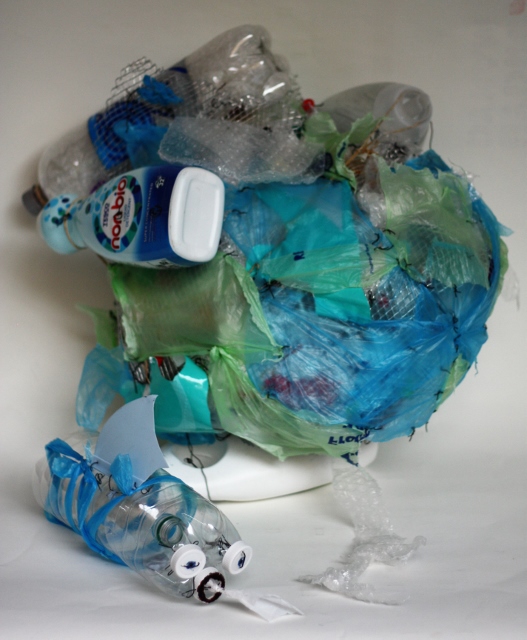 The world is full of plastic, and something needs to done about it!

We chose to do a sculpture of the world overflowing with plastic because that is what will happen if we do not do something about this dreadful crisis. We are both interested and intrigued about what we can do to help prevent plastic pollution from taking over our world.

We created this sculpture by moulding some wire mesh around a bouncy ball. Then we filled the empty sphere with plastic, after that we sewed up most of what was left open but left a gap to represent the world exploding with plastic. Next, we found some blue and green plastic bags and aprons that have been used in the school and tied them onto the outside of our sculpture. The next piece of plastic that we attached to our sculpture of the world was a two-litre bottle that we had previously filled with bubble wrap and fish that we had made out of plastic bags. The fish were used to represent sea creatures being trapped in plastic. After that we attached a plastic bag because they are commonly found in the oceans and on land, also many animals eat them because they think that they are food. For example, sea turtles eat plastic bags because they think that they are jellyfish.

The shark is used to represent the fact that if our world is full of plastic, our animals will have nowhere to live. We wrapped plastic around the shark to show it being trapped, then we attached plastic to the mouth of the shark to symbolise chocking on plastic.

We hope that you like our sculpture and all the others on the trail,

By Abi and Emma